This post aims at answering all your questions related to Puran Poli.

Check out these Puran Poli FAQs and let us know if we have any other questions.

Puran Poli is a delicious Maharashtrian sweet dish that is enjoyed by people of all ages. It is made with gram flour, milk, sugar, jaggery, ghee, and cardamom powder.

There are many different ways to make Puran Poli, and each household has its own recipe.

In this blog post, we will answer some of the most frequently asked questions about Puran Poli.

Presenting to you the 11 popular Puran Poli FAQs:

What is Puran Poli?

Puran Poli is a traditional Maharashtrian sweet dish that is made with gram flour, milk, sugar, jaggery, ghee, and cardamom powder. It is usually served during festivals and special occasions.

How do you make Puran Poli?

There are many different ways to make Puran Poli. Each household has its own recipe. However, the basic ingredients are gram flour, milk, sugar, jaggery, ghee, and cardamom powder.

What to eat with Puran Poli? 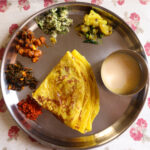 Puran Poli is popularly served with milk, ghee or milk mixed with jaggery (Golwaani). Many families in Maharashtra eat Puran Poli with Amti (a mildly-spicy dal made with chana dal).

How do you store Puran Poli?

Puran Poli can be stored in an airtight container and refrigerated for up to a week.

How to make soft Puran Poli at home?

Here are some tips to make soft Puran Poli at home:
– Use fresh, quality ingredients.
– Do not over-mix the dough.
– Rest the dough for 30 minutes before rolling.
– Roll the Poli thinly using a Puran Poli metal sheet.
– Cook the Poli on a medium flame.
– Check this video for the exact steps.

Puran Poli is healthier than most other sweet dishes as it is made with gram flour and jaggery.  It’s packed with nutrients, thanks to the lentils like chana dal (aka Bengal gram), which is high in fibre and folate and contains Vitamins A, B, and D. Jaggery is rich in antioxidants and has many health benefits.

In which state Puran Poli is famous?

Puran Poli is famous in Maharashtra. It is famous in Karnataka as Holige, in Andhra Pradesh as Obbattu, in Gujarath as Vedmi, and in Tamil Nadu as Boli.

How many calories are there in Puran Poli?

One Puran Poli has approximately 290 calories. But, these calories come with nutrition as gram flour is a good source of protein, fibre, and iron. Jaggery is rich in antioxidants and has many health benefits. The exact nutritional values depend on the ingredients used and the method of preparation.

Where did Puran Poli originate from?

Puran Poli is believed to have originated in Maharashtra. It is also popular in Karnataka, Andhra Pradesh, Gujarat, and Tamil Nadu.

Why is Puran Poli made during Holi?

Puran Poli is made during Holi, as it is a festive dish. According to folklore, this Maharashtrian recipe became popular because it can be prepared with the least ingredients and has a unique taste. People started offering Puran Polis as naivedya to the gods when the Holi bonfire was lit.

The practice persisted, and the dish has become a must-have during prominent festivals like Holi, Diwali, etc.

Yes, Puran Poli is good for weight loss as it is made with gram flour which is a good source of protein and fibre. It is also low in calories as compared to other sweet dishes. You can have Puran Poli without guilt if you are on a weight loss journey.
Puran Poli is undoubtedly a delicious and healthy sweet dish that can be enjoyed by people of all ages.

What is the shelf life of Puran Poli?

Puran Poli has a shelf life of one week when stored in an airtight container and refrigerated. The exact shelf life may vary depending on the ingredients used and the method of preparation.

Do you have any other questions about Puran Poli? Let us know in the comments below!